The Highland Echo • May 5, 2022 • https://thehighlandecho.com/2022/05/ben-stillers-severance-tackles-terrifying-dystopian-themes-in-the-workplace/ 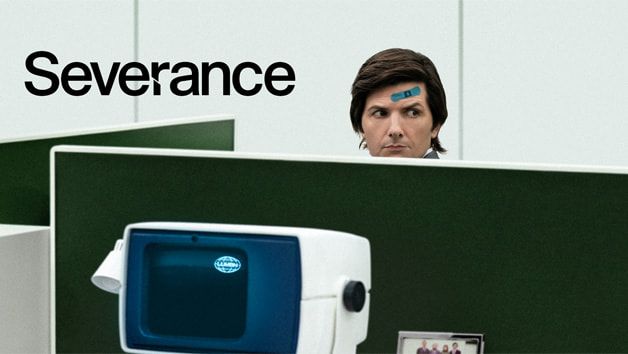 Apple TV+ has added a new series to their catalog. The first season of “Severance”, a new series written by Ben Stiller, was released on February 18, and is now being raved about by fans of thriller and comedy alike. It is being hailed as the perfect, dark combination of these massively popular genres. Amidst a wave of experimental thriller series, “Severance” seems to be the standout, and I completely understand why.

The series follows Mark Scout (Adam Scott), a man in his second year with Lumon, a company whose employees perform “mysterious and important work”. During the show’s pilot, it becomes quickly apparent that Mark is not working a normal 9-5. This seemingly average man, we find out, has been subjected to a less-than-average surgery, the titular “severance” procedure. The procedure, which involves the implantation of a chip in the subject’s brain, completely severs the mind and its memories, effectively splitting the subject into two separate people; one who works, free of outside distraction, and one who gets to go home at the end of the day.

Lumon requires that the experimental surgery be performed on employees of particular importance. These employees include the small group of four in Mark’s own department of Macrodata Refinement — Zach Cherry as the sarcastic and witty Dylan G, John Turturro as the dutiful Irving B, and the newest hire at Lumon, mysterious and defiant Helly R, played by Britt Lower. As the series progresses, viewers learn about the dark practices which lay beneath the gleaming white surfaces of Lumon, and see the lengths that the company goes to hide them. Fair warning for spoilers ahead.

Stiller does a great job of worldbuilding, especially considering the world “Severance” is set in is really not so different from our own. Something that I really appreciate about the series is that the ethicality of the procedure and the workplace-home divide is questioned and argued within the show itself. It exaggerates the already existing issue of work-life in a really creative way, with the idea of a publicly-available surgical solution. The scenes that feature college-aged students protesting against severance are both relevant in our political climate and add another layer of emotion on which a lot of the show is built. It is very much reminiscent of the groups which have protested topics like civil rights and scientific testing on animals in the past, and the severance procedure does seem to be a perfect intersection of those issues. Stiller seems to have a solid grasp on how such a procedure would be received from various social groups; the government exploits it, the youth see the flaws in it, while the rest of the world seems blind to it.

Fantastic plot and realistic content aside, the show is driven home by its actors, visuals, and the realizations that it allows viewers to come to on their own. Not only was the cinematography of the show gorgeous, diverse, and consistently creepy throughout, but it also finds ways to implant subconscious messages to viewers throughout the show. For example, in the final episode alone, two incredible images are drawn through camerawork alone, each of which display the mental split in a physical way; one being Dylan reaching straining to reach both levers to let his coworkers live consciously outside the office, and Helly on the stage, with half of her face being projected to each side of the curtain. Additionally, some of the major plotlines were artfully revealed without them being explicitly stated. It could be potentially confusing to a less attentive audience, but avid viewers will appreciate recognizing that the name of Irving’s dog was told to him, and seeing him realize this later, or the reveal of Mark’s supposedly-late wife, Gemma, to actually be one of his own coworkers.

It’s difficult to say which actor was my favorite, because the individual performances are stellar and chemistry between actors is top notch. Adam Scott leads fantastically as Mark — I admire that he isn’t the hero that one might expect, but is rather timid, and finds his voice throughout the show. He stands out in contrast to other characters such as Mr. Milchick or Dylan, who I found could be somewhat static throughout. Despite a few characters being one-note in the series, they still managed to establish that there was something more there there; additionally, it was clear that there was a deeper life and motive behind these characters that could be shown at a later date should the producers want to.

“Severance” season one lent itself extremely well to a second season, and beyond, which is a place in which a lot of recent series have fallen short. There has been a clear switch that producers seem to have made recently from decades long sitcoms to short miniseries, though Stiller clearly isn’t afraid of losing money by breaking this pattern (Producer Dan Erickson has recently confirmed that a second season is already in the works, after Apple greenlighted it in early April). Clearly, many people like the show as well, considering the number of shows that have been dropping like flies off of streaming services’ catalogs lately. The viewership and online discussion has shown that “Severance” is doing something incredible; proving that shows don’t need to air on live TV to be successful. You can stream “Severance” now on Apple TV+.