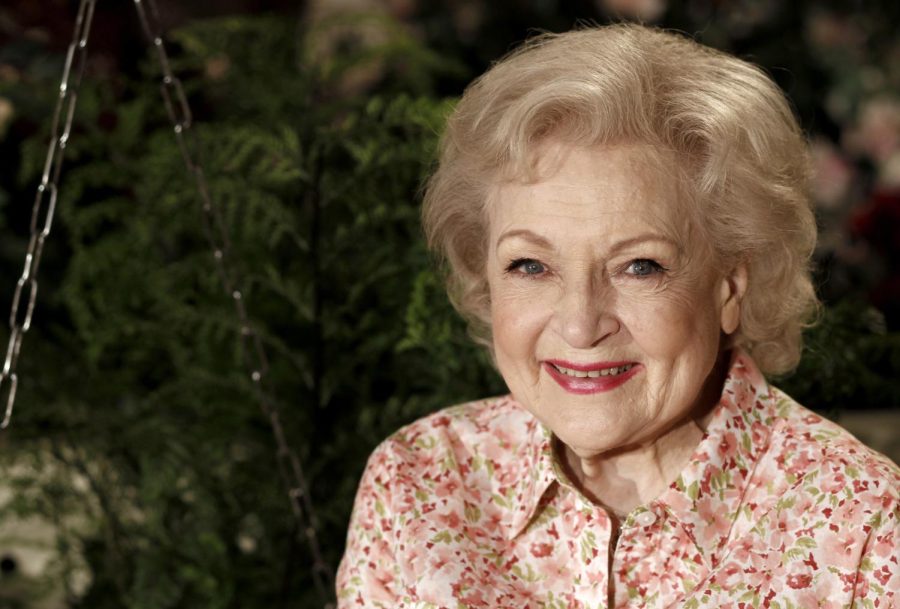 Sydney Durham, Out and About Editor

One of the most beloved female actresses, most would agree, was Betty White. She brought life and joy to the screen and always had a smile on her face. Unfortunately, she passed away on December 31st just days before her 100th birthday, which would have been January 17. She was loved by so many and a lot of people said that she would live forever. She was known for her role on the sitcom “The Golden Girls” which aired in 1985. White had a Guiness World record of the longest television career as a female actress. Close friends of hers had said that they didn’t think she ever feared dying because she wanted to once again be with her husband, Allen Ludden.

Betty White started acting in the 1940s on multiple radio shows and in 1949 she started appearing on television shows like “Hollywood on Television”. She later on became the host of this show. Later on she started to develop her own projects. She was on multiple sitcoms throughout her life including “Date with the Angels”, “Life with Elizabeth”, “The Mary Tyler Moore Show”, “Hot in Cleveland”, “Ladies Man”, and of course “The Golden Girls”. She also appeared on a few game shows. In fact Betty met her husband, Allen Ludden who hosted the show “Password” while she was guest starring, and they got married in 1963. She received three Emmy Award nominations for part on “The Mary Tyler Moore Show” and won in 1975 and 1976. In 1985 she started “The Golden Girls”. She earned seven Emmy nominations for the show and won the award in 1986. The show ended in 1992 where she also acted on a spin off show called “The Golden Palace”. She was on a few more shows after that and in 1996 she won an Emmy for her guest appearance on “The John Larroquette Show”. She also acted in several movies including “The Proposal”, “You Again”, “Annie’s Point”, etc.

Besides for her acting she was also known for being an animal rights activist. For decades she has worked to protect animals and she has also published a book about it called  “Betty & Friends: My Life at the Zoo”. She had a lifelong commitment to helping animals in need and always advocated and promoted different projects and organizations. In the 1960s, she even worked at the Los Angeles Zoo to help improve the conditions. White also worked with the Morris Animal Foundation in the 70s to improve animal health.

This lifelong commitment to animal societies and animal welfare led to a global movement on Betty White’s birthday to donate to animal related causes called the #BettyWhiteChallenge.  Her legacy lives on as donations in her memory totaled well into the millions.  People also donated goods to shelters and delivered hundreds of thousands of meals to pets. Some shelters waived adoption fees and also made it their goal to find homes for the adult dogs still waiting in their cages.  As a sweet tribute on Google, when people search her name a bunch of flower petals drop down and the screen displays “Thank you for being a friend.”

Besides the books Betty wrote about animals, she has also written at least ten other books. She wrote, “If You Ask Me (And of Course You Won’t)” in 2011, which is about life as a celebrity and her take on love with some life lessons and advice. In 1995 she wrote, “Here We Go Again: My Life in Television” which is about her first few decades being on television. Another popular one is “Betty White in Person” which is about all of the shows she has been in through the years along with her experiences and where they have taken her. Betty White can rest easy knowing her life impacted so many, and even in her death people have taken on her life-long missions to do good for society.  Thanks, Betty, for the memories!