The fate of climate change rests on your plate

The effect animal agriculture is having on the planet 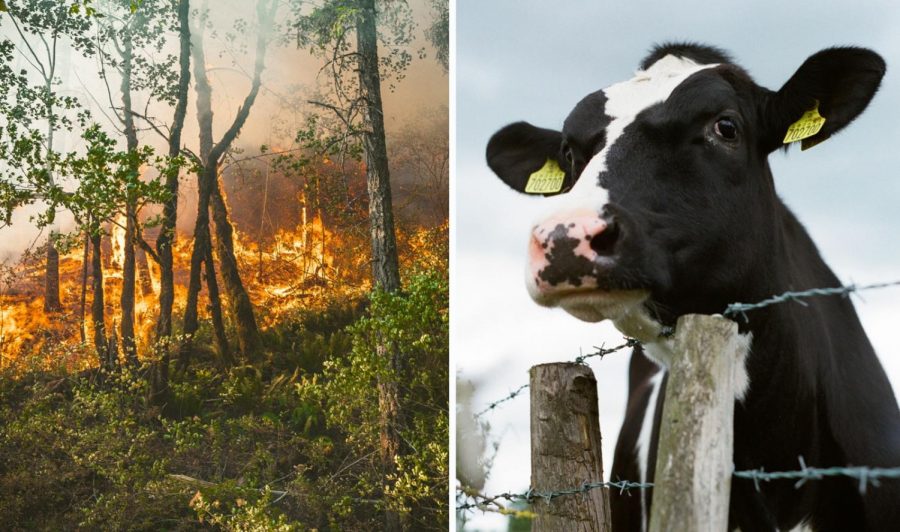 Those who try to bring sustainability and environmental consciousness to the table often focus their efforts on avoiding single-use tableware cutlery or plastic straws, but as we further our research into the human effect on the environment, we have found that the food on the plate matters too.

The breeding of animals and the process of making products from them, known as animal agriculture, has been and continues to have devastating effects. While producing milk, eggs, and meat, important resources such as land, water, and grains are being overutilized. Furthermore, the byproducts created during these manufacturing or production processes can have devastating consequences.

According to the EPA, the animal agriculture industry is responsible for 24% of greenhouse gas emissions, more than the emissions from transportation worldwide (https://www.epa.gov/ghgemissions/global-greenhouse-gas-emissions-data).  Greenhouse gases like carbon dioxide, methane, and nitrous oxide trap heat in the atmosphere and raise the overall temperature of the Earth. Climatenexus.com, an organization dedicated to researching and bringing justice to climate issues, found that the average American’s beef consumption creates 1,984 pounds of CO2e (carbon dioxide and other greenhouse gases), and replacing the large amount of beef consumption nationwide with plants would only produce 73 pounds of CO2e in comparison.

The reality of the animal agriculture industry is disconcerting and there are many negative effects seen in almost everything we eat, yet there are ethical and sustainable means of eating and gaining proper nutrients. If all Americans cut out all consumption of meat products and opted for plant proteins, we would reduce greenhouse gas emissions by 2.6% throughout the United States, according to a 2017 report from UC Davis professors Mary Beth Hall and Robin White. If all Americans cut their average meat consumption by just a quarter and chose more plant based options, greenhouse gas emission would be cut by 82 million metric tons per year, according to Scientific Journal Reports.

It is not commonly thought that the many important nutrients and proteins found in meat products can be found in various other types of food. For example, almonds are packed with essential nutrients like magnesium that can replace essential nutrients found in meat products. Other substitutes include vegetables; yes, vegetables offer more than just vitamins. Broccoli and other dark leafy greens are extremely high in protein and offer immune support within the body. It is easy to make small changes in your diet in order to help sustain the environment and not contribute to the depletion of important natural resources.

It could be hard for all people, given their different circumstances, to completely omit all animal products from their diet, but, there are still small changes that one can make in his or her diet and food choices to avoid contributing to the climate issue on such a large scale. Supporting small businesses that have smaller environmental footprints rather than supporting mass-produced items and brands is one change. If accessible, local farmers’ markets are a generally sustainable option, as would be choosing plant-based options over animal products. Opting for seasonal produce from local establishments helps support not only the small food businesses, but also helps reduce the overuse of resources to grow crops that are not in season.

Environmental concerns are growing, and as consumers it is difficult to eat in a completely sustainable manner, regarding plastic packaging and other factors, but as research furthers into the larger factors that contribute to the impending crisis, cutting down on animal products may be the answer.