“Borat Subsequent Moviefilm”: Is it good, and what is its message? 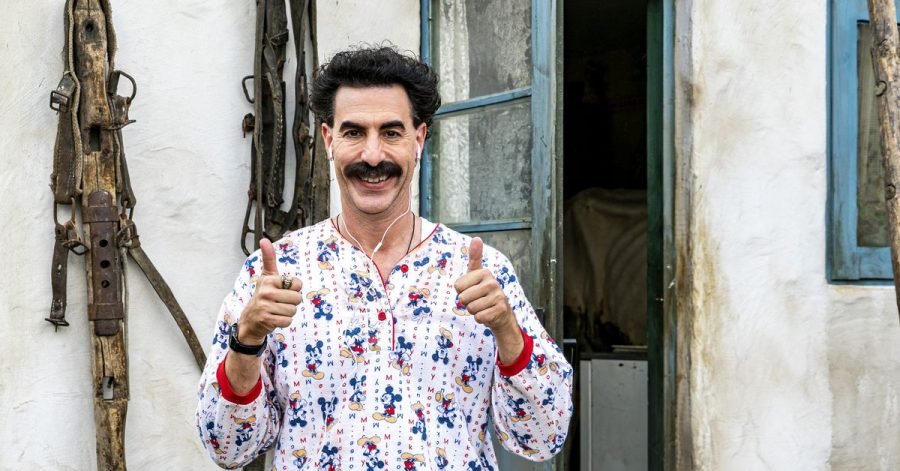 Back in 2006, a little movie called “Borat: Cultural Learnings of America for Make Benefit Glorious Nation of Kazakhstan” (to avoid that mouthful, it will be referenced as “Borat” going forward) was released. It starred comedian Sacha Baron Cohen as a Kazakhstani reporter who is sent to America to learn why it is regarded as such a great country. Filmed in a mockumentary style and intended as a satire, the movie was a huge success critically, while also proving to be controversial due to the depiction of Kazakhstan and how the filmmakers got to show some of the more despicable aspects of American culture. Although incredibly popular, the character of Borat itself became too popular, causing Baron Cohen to retire the character in 2007 and instill doubt over a possible sequel.

That is, until now!

2020 has of course been the year of unexpected, and to add to the increasing number of surprise events, we can add “Borat Subsequent Moviefilm”. Fourteen years after the first, Baron Cohen has delivered a very timely movie that was actually made during the COVID-19 pandemic. This time, Borat returns to the U.S. to try to make peace with America by offering Vice President Mike Pence a gift. That gift turns out to be his daughter, Tutar, played by Maria Bakalova.

Due to the pandemic, “Borat Subsequent Moviefilm” was released through Amazon Prime, and as of November, is the second-highest streamed movie of the year. The film has more or less the same reception as the first film, with mostly positive reviews regarding the humor, performances, and critique of American culture, but there has been much controversy regarding certain scenes that dealt with the recent 2020 election.

Is “Borat Subsequent Moviefilm” worth the watch? Yes and no for me, although I do encourage everyone to check it out to make up your own opinion. I do really like the first “Borat” movie, which I watched for the first time a few days before this one. Some of it is definitely of its time, and there are a lot of ridiculous moments, but it still managed to be quite entertaining. Baron Cohen makes the Borat character really engaging, and he pulls off some lines and situations that were so funny, I had to pause the movie for fear of missing some of it! The film also functions rather well as a satire, bringing to light many issues about American culture, from the way certain men think about women, to even some brief assessments of the “American Dream”. This creates a comedy that is crass, but also layered and entertaining.

All of that is on display in “Borat Subsequent Movie Film” as well. While perhaps not as insensitive as the first film, Baron Cohen and director Jason Woliner are still able to achieve that balance of humor and timely satire from before. While I felt that Baron Cohen wasn’t as good as he was in the original, he still delivers a performance that is quite funny and satisfactory. It is still the same Borat from before who many people love and find funny.

The standout character though, in this film, is Maria Bakalova as Tutar! She has a fantastic arc, and she can match more than enough wits with Baron Cohen as Borat. The father-daughter dynamic is really well executed, and has a heartwarming ending that doesn’t necessarily add anything new to the table in terms of that storyline, but still leaves an impression on you.

As for the satire, “Borat Subsequent Moviefilm” has a much clearer target than before. While “Borat” was mainly just a critique of American culture from a broad perspective, the sequel leans more into the COVID-19 pandemic, how people have reacted to it, and it exposed a few things about Trump’s associates. Due to its release before the election, the directors were clearly trying to make a political statement. In doing so, I think the film’s comments and critiques leave a larger impact on the audience. It kind of reinforces the notion that sometimes, the American belief of doing whatever you want gets in the way of important issues, and that refusal to wear a mask because “You can’t tell me what to do!” is heavily affecting the nation. However, “Borat Subsequent Moviefilm” also has a bone to pick with the Trump Administration, with a specific scene featuring Rudy Giuliani that has made quite the controversy. Here, too, the film makes interesting points about our nation’s current leaders that should be considered.

However, I do think that overall “Borat Subsequent Moviefilm” is weaker than the first for two reasons. The first reason is that I felt it was a little too long. The first film is about 84 minutes, while this one is about 96 minutes. While this may not seem to be a huge difference, to me, it was. The first “Borat” had the perfect amount of time to present what it needed to, and going even just a bit more beyond that just kind of tainted the experience for me. Perhaps it was also the pacing that attributed to this, but either way, I think it kind of outstayed its welcome.

My second issue is that the film is a bit too structured for me. Part of the charm of “Borat” was that it was mostly unpredictable, with Baron Cohen putting people on the spot, with their reactions being totally spontaneous. “Borat Subsequent Moviefilm” still has that, with a concert scene that displays a level of disgust for a select group of Americans really well, but there also is a lot more structure, whether it’s dealing with the father-daughter storyline between Borat and Tutar, or some of the actual jokes themselves. This structure considerably lessens the impact a given joke or prank might have. Therefore, I think I’d be safe in saying that for me, the humor in the first film is more consistent and hits harder, so to speak.

Is “Borat Subsequent Moviefilm” worth your time? I’d say so. Even though it has major ties to an election already passed, even though the humor is not as strong, and even though it is a bit long, it is still a very timely movie. The performances are charming in the way Borat has always been charming, when the humor hits, it hits hard, and the points that it makes through satire are quite poignant right now during the pandemic. We need to be safe, and take things seriously. In that way, it is quite an important film in 2020, and even as a comedy on its own, it is worth the watch if you loved the first one.