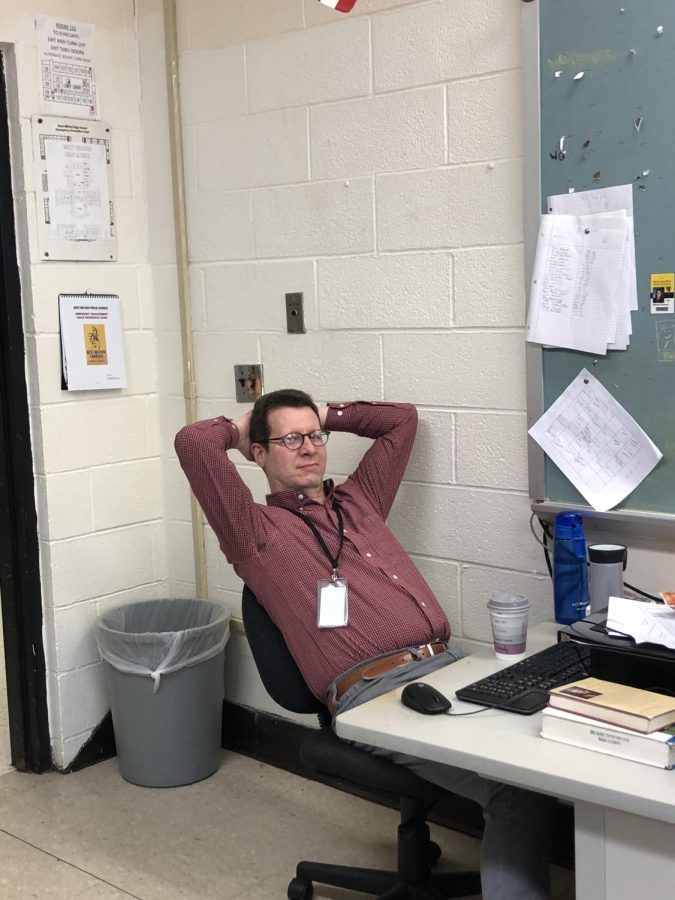 Above: Nitkinas sits peacfully in his chair,basking in the chaos he created, watching the world burn over the spoon game. Photo Courtesy: Patrick Babbitt

War can change a person. It can make people go crazy, so much so that the only person you can trust during battle is yourself, especially when spoons are involved. Yes, spoons. Every year in Mr. Nitkinas’ 11th grade AP English and 12th grade college prep classes, Mr.Nitkinas introduces the spoon game to his classes and all his students love it.
The game is very simple to play. Each person is given a spoon, while being assigned one target. The goal is to catch your target without their spoon. So, for example, if you go up to a person and then ask them, “Do you have your spoon,” and they don’t, then that person is eliminated. However, if they do have their spoon, then nothing happens, and the game continues; but now your target knows you have them. Some of the ways you can get your target out include, having someone steal their spoon, seeing them in public and knowing they don’t have their spoon on them, and by making allies with your target to betray them. I know it sounds confusing, but once you’ve sat down and thought about the game’s rules, it’s easy to play. Students always enjoy this game every year, as they always enjoy it.
When asked how he came up with the game, Nitkinas said “It was started by a former AP student Katie Schiller about 10-15 years ago. She was able to learn about it from other college students who played this game.” Since Schiller came up with the game, she is a black belt when it comes to the spoon game. Although she is known as the greatest spoon game player ever, Nitkinas recalled a moment of weakness, “One Halloween I was trick or treating by this haunted house. A teenage girl who was wearing a Darth Vader costume comes out of a minivan. She said, “Hi Mr. Nitkinas,” and pulled out a lightsaber with a spoon on it. She then asked me if I had my spoon. At first I acted confused, then she ripped off the mask and it was her. Then the whole class came out of the minivan, as I slammed my foot in anger.”
There have been unique ways which students have eliminated players such as at National Honor Society Inductions, at church, and even flying all the way to California. Nitkinas claimed, “Once, after a student graduated, he went to college in California. Another student who had that person as a target bought a plane ticket, and flew to California and when he got to the college, he asked the student if he had the spoon, and sadly, the student did not.”
The spoon game usually continues post graduation, as students still play even when high school is over. The record spoon game is one that lasted 2-3 years! Although it’s still fun every year, Nitkinas says “There’s much more cheating now in the game then back then, as people can buy the same spoon online. Yet it can also be easier for students with the rise of technology, as digital media allows students to know where someone is.”
The reward for winning the spoon game is pride, as no one has ever won a trophy or gift card. Personally, I don’t think you need a trophy, as I think pride is the best gift you can get from this game.
As someone who has been eliminated from the spoon game, after having someone steal it while I was trying to tape it, my advice is to do nothing with your spoon in public. Always keep your spoon attached to you, or keep it hidden, as someone can easily steal it. If you lose your spoon then keep your mouth shut about it so no one can get you out. One should also know one’s target very closely, as it can help to make allies so a person can get their target out easier. However, you don’t want to get too close to your allies, as they may become your target one day.
Everyone always has fun, as the game takes strategy to become the overall champion. If someone slacks off, then he or she will lose. Overall, the spoon game is one of the best games to play at West Milford High School and all students enjoy it.