“Mandalorian” is the show everyone’s been hunting for! 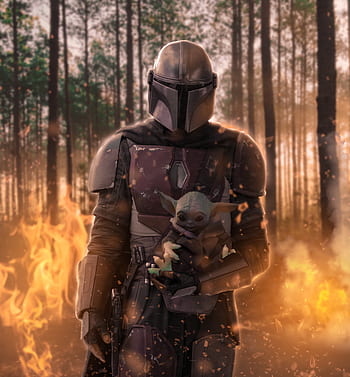 Above: The Mandolorian in all his glory Photo Courtesy: Pixabay

Disney has always been majorly successful, but with its acquisition of both the “Star Wars” and “Marvel” franchises it has gained a wide collection of esteemed media. It was only a matter of time before Disney would create a service that allowed its fans to watch all of its shows and movies in one place, especially considering the popularity of Netflix.
The problem is, most people already own their favorite Disney movies, so Disney greenlit a few exclusives for the platform’s release; some would release after, like “Wandavision”, or the 8th season of the “Star Wars: The Clone Wars” cartoon. Others, like “The Mandalorian” would be available on day one.
“The Mandalorian” combines the high tech world building of “Star Wars” with the Wild Western themes tried and true in Spaghetti Westerns such as “A Fist Full of Dollars” and “The Good the Bad and the Ugly”. But between the good the bad and the ugly, this is definitively the good. The jokes always hit their marks, the characters are memorable, and the show is littered with references to the franchise’s history.
“The Mandalorian” is the story of Din Djarin, an orphan who was raised by the bounty hunting race of human like aliens called the Mandolorains. He continues the tribes traditions as he treks across the reaches of the galaxy hunting his bounties. However, the economy impacts even the heartiest of contract killers as the eponymous character is forced to take an unusual job to recover a secret (and adorable) target, dead or alive..
If there were any concern that the pilot episode was a fluke, it can be laid to rest as the series continues to knock it out of the park with its episodes.
Episode Two features the Jawas, and characterises them past the thieves and scrappers we saw them as in “A New Hope”. We see that they have an almost fanatical attraction to an egg, so much so that they’ll trade The Mandolorian the parts he needs for his ship for one. The catch is that the egg is guarded by its mother, leading to an epic showdown.
Overall, “The Mandolorian”, and “Star Wars” as a whole, revels in its characterization. We learn about the bounty hunter and the back water world he works in from every little interaction he has. His talks with the person he receives his bounties from portray him as a hard worker who is stubborn to a fault. We also can learn a great deal from his flashbacks to his troubled past, where we see his family killed in the siege of Mandolore, and how he was saved by a nameless bounty hunter.
Disney has lots of things for “Star Wars” fans to wait for, from the final season of “Star Wars: The Clone Wars”, to the new series starring Ewan McGregor as Obi Wan, which has been delayed. Not to mention season two of “The Mandalorian”, which is eagerly awaited due to the show’s cliffhanger ending.
Overall, the fans have spoken, “The Mandalorian” is a fine addition to the Disney Plus collection.