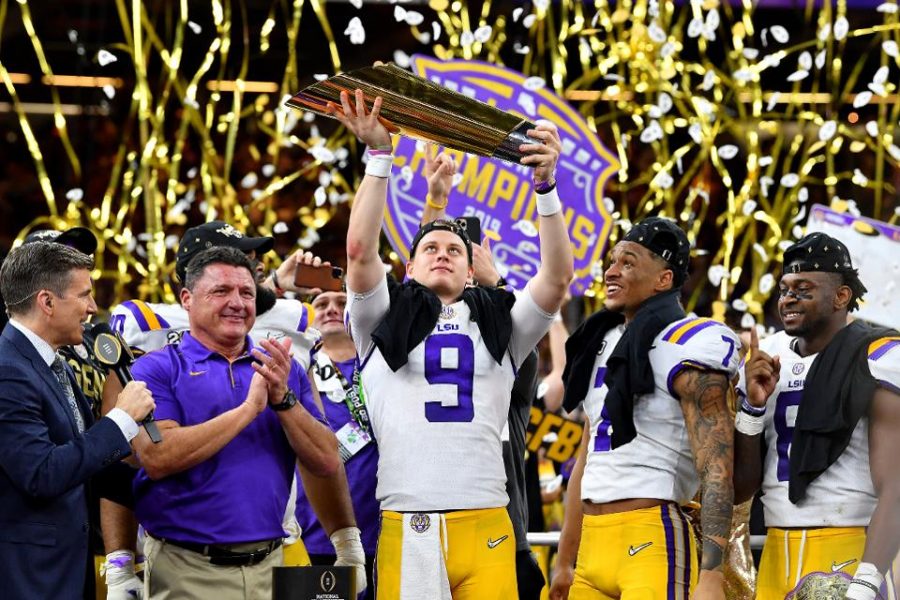 Every college football season, the season ends with a series of Bowl games. While games like the Belk Bowl and the Citrus Bowl are fun to watch, none are quite as important as the College Football Playoff, a four team tournament with the best teams in the nation.

This year featured a mix of newcomers and experienced teams to the playoff. The #1 overall seed LSU tigers, led by Heisman winner Joe Burrow, are making the teams first appearance in the playoffs. LSU had good wins against national powerhouses over the course of their undefeated season such as Alabama, Auburn, Florida and Texas.

Ohio State comes into the Playoffs with the #2 overall seed. Ohio State won the first playoff back in 2014 and are led this season by Heisman finalist and #1 draft prospect Chase Young, as well as young quarterback Justin Fields. This season, Ohio State had good wins during their undefeated season against Penn State, Wisconsin, Michigan and Cincinnati.

Clemson fills in at the #3 seed. Clemson has appeared in the playoffs over the past four years and won it twice. Clemson is led by the number one 2021 draft prospect Trevor Lawerence, as well as linebacker Isahiah Simmons. Clemson had wins against Texas A&M and Virgina during their undefeated season.

Finally, the #4 seed Oklahoma Sooners cap off the playoff field. Oklahoma has appeared in three playoffs, but have never won the title. This year’s team is led by Alabama transfer Jalen Hurts, a heisman runner-up and national championship winning quarterback. Oklahoma lost a game early in the season to Kansas St., but have two wins against nationally ranked Baylor.

In the first game of the playoffs, LSU played against Oklahoma in the Peach Bowl. There was plenty of hype going into the game, as it was the first ever Heisman winner vs Heisman runner up bowl game matchup. Both teams feature high-powered offenses with multiple offensive weapons with their great quarterbacks.

Despite all the hype leading up, the game was a snooze fest.  LSU dominated the game in all fashions, winning the game by a final score of 63-28, and was winning 49-14 going into halftime. Burrow threw for 493 yards and 7 touchdowns with limited playing time. Wide Receiver Justin Jefferson caught 14 passes for 227 yards. On the other sideline, Jalen Hurts did not have such a great performance. Hurts threw for only 217 yards and an interception as the LSU defense did a great job containing him.

In the other semifinal, Clemson and Ohio State met in The Fiesta Bowl. The game featured the top two quarterbacks in the recruiting class of 2018 in Justin Fields and Trevor Lawernece. The game also featured the teams many people believed to be the most balanced in the playoff.

The game was a back and forth contest between the two schools. However, the ultimate winner of this slugfest was Clemson, 29-23. Lawrence led the way for Clemson with 259 passing yards on top of 107 rushing yards, to go along with three touchdowns. For Ohio State, Fields passed for 320 yards, but was not enough to lead Ohio State to victory.

That set up a LSU-Clemson National Title game on January 13. The game had a David vs Goliath feel, with Clemson being so experienced in the Playoffs while it was LSU’s first appearance in the Playoff. However, the game went the opposite way with LSU winning 42-25. Burrow led the charge for LSU with 463 passing yards and 5 touchdowns, while Jammar Chase had 9 receptions for 221 yards. Lawrence on the other hand took a big step down from his semi final performance, only having 234 passing yards and no touchdowns.

Despite LSU controlling the playoffs in all aspects, it was the perfect way to cap off a season that will forever be remembered for LSU’s dominance.