Timothy Magasic, the official salutatorian of the WMHS class of 2019, has committed to attending the Stevens Institute of Technology for chemical engineering. During his time at the high school, Magasic participated in various activities, including PALs, National Honor Society, Science Honor Society, Italian Honor Society, and finally Math Honor Society as President. This school year, he achieved the rank of Eagle Scout by creating a sign outside of St. Joseph’s Church to display dates for local events. Maybe the most impressive of all his accomplishments is founding the official WMHS Stickball League, which practices in the senior parking lot on a weekly basis.
When asked about his long term future plans, Magasic clearly explained he wanted to “go to college, become an engineer, and possibly become involved in scouting again as an adult leader to help out the community.” He cited his interest in chemistry and calculus as motivation to pursue chemical engineering. Additionally, Magasic noted that mechanical engineering could also be in his future, due to his love of physics.
Over the course of the last four years, Magasic enjoyed the independence and self accountability of high school. He said that he learned how to “manage time on [his] own terms,” which will prove valuable as he advances into college. Conversely, he stated that gym class was the least enjoyable experience of high school– he’d “rather have the option to go into school later or leave earlier instead.”
Magasic, despite his accomplished grade point average and history of taking accelerated classes, ultimately believes his journey to salutatorian was an accidental, if not inadvertent one. He simply wanted to “keep high grades for college.” Rank wasn’t a concern to Magasic, but succeeding on a individual level was paramount, as evident by all of his continuous hard work. This is inspiring to many, as his concentration on intrinsic learning and not external rewards has translated into such an academic achievement.
Despite all of the stress and dedication, Magasic reports being proud of the last four years. He is excited to take the next step into his educational career and focus on his studies at Stevens. When asked for parting advice to underclassmen, Magasic succinctly said, “work hard, but don’t overwork yourself and take the time to smell the roses, as the travelocity gnome says.” Magasic’s legacy at West Milford will be remembered as a fun-loving, enthusiastic, and intelligent student who actively sought education and a good relationship with other peers and staff. The stickball league, Math Honor Society, and all of his other activities will certainly miss his presence as he embarks on the college journey. Until then, his saludictory speech is highly anticipated by friends, family, and teachers alike. 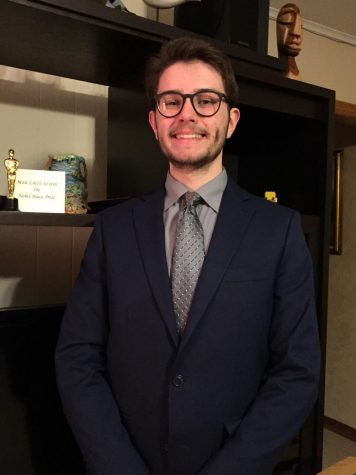