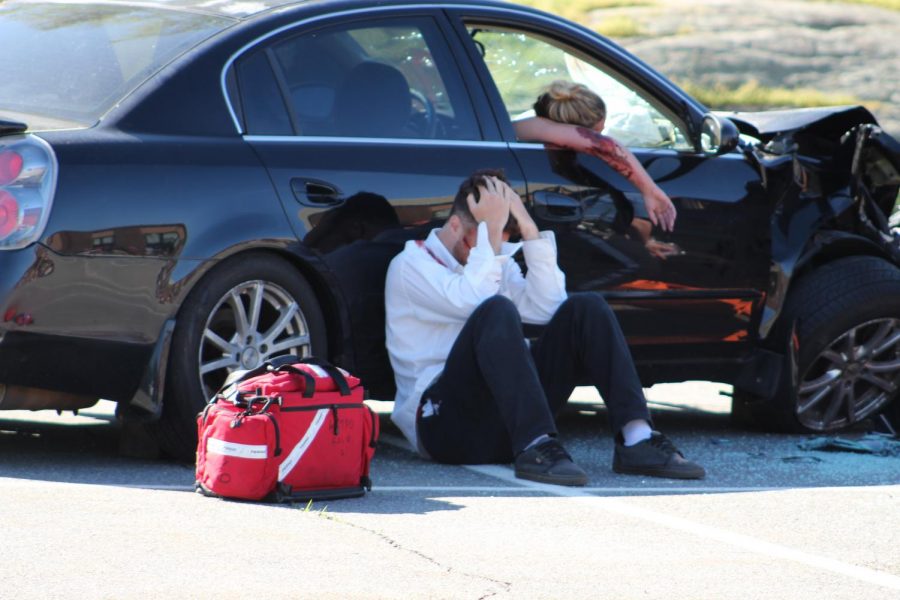 On June 4th, the physical education team put together the biannual DUI reenactment to share the dangers of driving while under the influence. The day started with a video sharing statistics of the devastating impact of drunk driving such as teen alcohol use kills 4,300 people each year. The demonstration then began with another video clip of actors and actresses getting drunk and then they start to drive. The video then shows Michael Lambert video-calling his son letting him know he is going to pick him up and take him to the park. The students are then rushed to the parking lot in which there are two crashed cars.
Suddenly, police cars come and they summon firetrucks and paramedics to help. The driver is pulled out of his car and they begin to destroy the car to save Mr. Lambert. This created an emotional experience for most viewers when they begin to think of his son waiting for him. We see the passenger being pulled out of the car and being moved to a stretcher. The police give a report calling for a helicopter and the overwhelming rushing of orders and descriptions of the horrendous scene fill the speakers. Then as the driver, who was barely injured, was brought to the front of the scene and performed a test run by a police officer to determine if he was under the influence. Then the police officer turned him around and said, “You are under arrest for a DUI.” Abruptly, Mrs. Salle’s screams fill the air, as she played the mom of the passenger who had passed as she howls tears impact many viewers.
The deceased passenger is the then put into a hearse and students watched their beloved classmate die in front of them. Taylor Pevny, a key organizer of the event said, “To raise awareness of the dangers of drinking and driving around prom season and to also empower students to make the right decisions and safest decisions.” This message was clearly portrayed through this representation. As Sargent Parello said, “If we want to fix drinking and driving, do not be part of the problem, be a part of the solution to the problem” This acted as a perfect quote to explain the motivation of the organizers of the event such as Pevny, Nikki Gwinnett, and Jessica DiNetta. This staff also recognized the importance of doing this event before prom and senior weekend. These nights are known for the students partying and abusing substances, spreading messages like staying above the influence.

Students were strongly impacted by this performance. Colin Webb says, “It was an eye-opening experience and startling to see such a heartbreaking event.” This was a common feeling throughout the student body. As students left the reenactment many people had tears streaming down their face. Even teachers felt the impact of the event. Mrs. Nicole Petrosillo said, “It was an exceptionally moving experience that make me worried about my students and my children.”