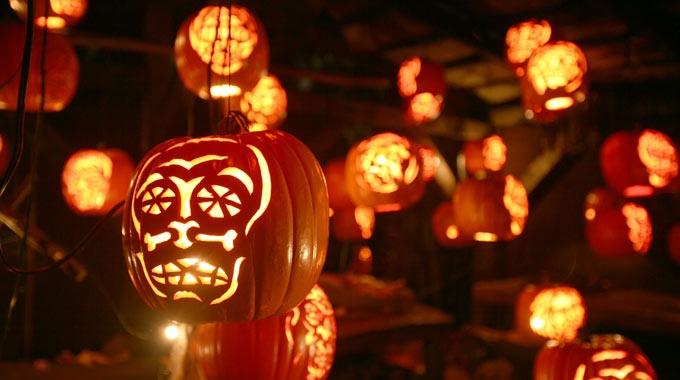 Halloween is just around the corner! What are your plans for this spooky holiday? If you have nowhere to go, try checking out these creepy and cool locations. Each one of these places is unique and certainly worth whatever the cost. Whether you’d rather walk down a field of jack o’lanterns or through the cells of tormented inmates filled with screams, there will be plenty of sights and frights this Halloween. No matter which place you choose to go, there is no doubt that you’ll have a good time.

If you aren’t into horror, a unique and cool looking fall attraction is The Blaze. The Blaze is an area in Hudson Valley filled with over 7,000 jack o’lanterns! These jack o’lanterns are cut and formed to create stunning glowing designs, from ghosts to dinosaurs. There will also be a visit from the famous pumpkin-headed killer from Sleepy Hollow, the Headless Horseman! The Blaze is  family-friendly, with admission prices of $20 for adults and $16 for kids (except for Saturdays which cost $25 for adults and $20 for kids).

In Tuxedo Park, New York lies the Forest of Fear. The Forest has five different horrifying attractions: Uncle Jimmy’s, Das Kamp, Blind Panic, Mourningwood Cemetery, and the Slaughterhouse. Each attraction can send a chill down your spine and a scream from your mouth. This attraction would definitely be worth the $20 per person.

Another classic way to spend your Halloween is at an abandoned asylum. In Cedar Grove you’ll find the Essex Mountain Sanatorium, or Morris Plains hides the dark past of the Greystone Psychiatric Hospital. Both hospitals were closed down and abandoned years ago. The hospitals have dark memories of abused mental patients, suicides, and violence. Even though there are no actual attractions, actors, or jumpscares, these empty buildings are just as scary, possibly even scarier, than other fan made horror attractions.

Another family-friendly place to be is Heaven Hill Farms in Vernon. The haunted hay ride is fun and child-friendly along with the other attractions at the farm including a corn maze, pumpkin picking, adorable animals to look at, rides and more. Fresh produce and sweet treats are available to buy there as well. At Heaven Hill Farms there is always something to enjoy, no matter your age.

Even though the attractions will be staged, the legend of the Brighton Asylum is another chilling place to visit. The Brighton Asylum was once an actual mental hospital back in the 1940’s, but had its doors closed only 12 years later because of unimaginable horrors that had taken place.

While the asylum was in use, there were awful cases of abuse, poor living conditions, disappearances, gruesome experiments on the patients, ear piercing screams in the night, and extreme violence. The police pended searches for the mistreatment within facility, but there were no investigation records.

Now the asylum, once closed to the public, reopens its doors to awaken the haunting past, with scary attractions for the price of $25 a person. Similar to the Brighton Asylum attraction is one of the most famous and largest attractions in the country in Philadelphia, Pennsylvania, the Eastern State Penitentiary: Terror Behind the Walls.

The prison ran from 1829 until 1913, and was shut down due to the dark crimes that occurred there. The original goal of the jail was to make criminals find God, but in reality, all this place had done was driven the sane into pure madness. The prisoners were cut off from all communication, even with each other. They were barely allowed out of their cells, with little sunlight at all except for one small slit in the ceiling known as The Eye of God. When they were removed from their cells, they had black hoods over their heads so they could not talk or see anyone else. These poor people were so desperate for any sort of interaction with another human being that they would tap on the pipes or whisper through them. However, if these inmates were caught, the punishments were extremely severe. The guards would use terrifying tactics to torment these prisoners.                     After the prison was shut down, there were reports of paranormal activity as well. Now the doors are open to the public as a horror attraction that is guaranteed to make anyone scream at the top of his lungs. There is a large schedule to show the range of prices to enter this nightmare accessible through the website www.easternstate.org.